COLORADO SPRINGS (Oct. 18, 2021) — The Colorado Golf Hall of Fame today officially announced it will relocate from its current home at the Riverdale Golf Courses in Brighton to The Broadmoor Golf Club in Colorado Springs. Plans call for the move to be completed in the spring of 2023 to coincide with the Colorado Golf Hall of Fame’s 50th Anniversary, representatives from the Hall and The Broadmoor said.

The relocation will be the first of three major events scheduled in 2023 to celebrate the pantheon’s half century. A special edition of the Hall’s annual golf tournament will take place at The Broadmoor that summer, and the resort will host a Golden Anniversary gala in the fall.

“It’s hard to imagine a more perfect fit,” the Hall of Fame’s Executive Director Jon Rizzi said. “Since 1973, our mission has been to honor and recognize excellence…past present and future, and for more than a century, The Broadmoor has dedicated itself to delivering exceptional service, uncompromising excellence and distinctive amenities—including its legendary East and West golf courses.”

In addition to decades of Forbes Five-Star and AAA Five-Diamond ratings, The Broadmoor also boasts Hall of Fame golf pedigree: nine USGA Championships (including the 2025 U.S. Senior Open), five NCAA Division I men’s golf championships and 100 years of the prestigious Broadmoor Invitation tournament and dozens of other national, regional, state and local events. The Colorado Golf Hall of Fame counts 11 Broadmoor legends among its 147 inductees. 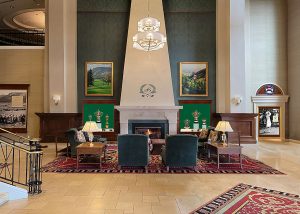 The Colorado Golf Hall of Fame will occupy the high-ceilinged atrium lobby of the main golf club and the long east-west corridor entered from the lobby’s northwest corner. The cherrywood finishes will echo those in The Broadmoor Golf Club’s Heritage Hallway and Golf Grille, both of which were designed by Denver-based artworker Nancy Woelfel, whom the Colorado Golf Hall of Fame has also engaged for this project.

A capital campaign to fund the project has already commenced, with money coming from grants and public and private donations. Both organizations look forward to a long, mutually beneficial relationship.

“We have had a great relationship with Riverdale since 2004, and we appreciate the generosity of the Adams County commissioners, but we were running out of room there,” Colorado Golf Hall of Fame President Kevin Hood explained. “And the opportunity for greater space, visibility and exposure at a world-renowned resort is hard to pass up.”

Calling it “a great privilege and source of pride for The Broadmoor,” The Broadmoor’s PGA Director of Golf Russ Miller said that “showcasing the distinguished men, women and golf championships that have had such a profound impact on golf in Colorado allows our members and our guests to recognize and reflect on the great history and traditions of the game.”

“The Broadmoor is very proud of our long and rich golf history and believe that the Hall of Fame has found a fitting new home at our resort,” The Broadmoor’s President/CEO Jack Damoli said. “We look forward to sharing the stories and displaying the memorabilia of the many individuals from Colorado who have impacted the game of golf for everyone to enjoy in the future.”