A Rare Treat for Hall Supporters

Attendees of this year’s Colorado Golf Hall of Fame events at CGC get to see a magnificent new tribute to Ben Crenshaw, Bill Coore and the history of golf architecture.

For a private club that only opened 15 years ago, Colorado Golf Club already abounds in history. After all, in the span of a decade, its members have welcomed three international championships—the 2010 Senior PGA, 2013 Solheim Cup and 2019 U.S. Mid-Amateur—to their stunning layout in Parker.

Framed tableaux capturing the electricity of those events line the freshly repainted walls of the clubhouse. But Colorado Golf Club’s place in history extends well beyond those championships, with a course-architecture tradition that expresses itself through a layout designed by Bill Coore and Ben Crenshaw—a design team that can trace its lineage directly to Old Tom Morris.

A magnificent exhibition honoring and detailing that pedigree now commands the hallway leading from the entrance to what is now known as the club’s Crenshaw Boardroom. Written, researched and curated by award-winning golf writer Tom Ferrell—who happens to be CGC’s membership and marketing director—the narrative comes to life with photographs and original busts and drawings by Robert Fletcher, the same artist who began immortalizing Colorado Golf Hall of Fame inductees in 2019.

Fletcher’s work shines most vividly in the high-ceilinged Crenshaw Boardroom, which largely celebrates the World Golf Hall of Famer’s playing career. In addition to items such as a caddie bib from one of his 20 Open Championships and his 1999 Ryder Cup captain’s golf bag, full-body paintings of the five individuals who had the greatest influence on him—Coore, Jackie Burke, Bobby Jones, Harvey Penick, and his father, Charlie Crenshaw—surround the conference table.

The room’s dominant canvas immortalizes Crenshaw’s captaincy of the 1999 U.S. Ryder Cup team, showing each player on the winning squad in action. A smiling Crenshaw, cup in hand, centers the work, and, to his right, grins Michael Jordan—whose presence a number of the players credit with inspiring their historic comeback.

Near the entrance to the boardroom are original items from Crenshaw’s Masters victories in 1984 and ’95, including his blue shirt (patterned similarly to those worn Sunday by the ’99 Ryder Cuppers) and the bib that Augusta caddie Carl Jackson wore in ’95, when an emotional Crenshaw buckled with emotion after sinking the winning putt just days removed from the funeral of Penick, his longtime instructor. 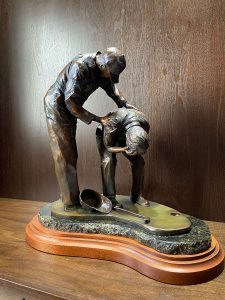 Fletcher’s bronze of that iconic moment stands nearby in faithful tribute. He has made two other casts of the statue, with one to be given to Crenshaw at an April reception.

“I’m just in awe of what they’ve done,” the Arvada-based artist says of the project, which was spearheaded by CGC member Chris Pitaniello. “I’m thrilled by the way they have hung and lit my work. Artwork looks so much better when it is displayed well.”

“Any club that considers itself a culture-driven club should think seriously about telling its story,” says Ferrell, the membership and marketing director tasked with that storytelling. “It’s a real appreciation of heritage and history,” he adds, promising that anyone attending the June 1 Colorado Hall of Fame tournament or the Aug. 29 Colorado Golf Hall of Fame induction dinner is going to be “blown away” by what the club has assembled.

While access to these displays is usually confined to club members and their guests, anyone attending this year’s Colorado Golf Hall of Fame Tournament (June 1) or Induction Dinner (Aug. 29) will enjoy the privilege.