Student of Newest Hall of Famer Ranked No. 1 in Country

Two-time champion A.J. Ott of Colorado State has worked with Ed Oldham since 2019.

As the instructor for Jennifer Kupcho, Ed Oldham experienced the thrill of watching one of his students win nine collegiate tournaments—including the 2018 NCAA Division I Women’s Golf Championship—as well as the inaugural Augusta National Women’s Amateur. 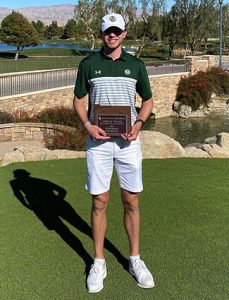 A.J. Ott beams after his second of two straight victories in the California desert.

Jennifer and her brother Steven have both gone on to win on the professional level, but for Oldham, the longtime director of instruction at The Ranch Country Club in Westminster, seeing a student capture a college tournament still never gets old.

Especially when that student accomplishes it in back-to-back events, as Colorado State University’s A.J. Ott did in February, earning him Golfweek’s Player of the Week (2/17-22) and vaulting him into the No. 1 position among all NCAA Division I men’s golfers, according to Golfstat’s March 9 rankings.

Ott’s 68.76 scoring average and 4-o record against players ranked in the top 100 placed him ahead of players from such traditional powerhouses as Wake Forest, Pepperdine, Arizona State and Florida State.

In the span of seven days in the California desert, the left-handed Fort Collins native—who is is taking advantage of his extra year of NCAA eligibility due to the COVID-19 pandemic—earned his first two NCAA wins.

At the Prestige Individual Invitational, held Feb. 15-17 at Coral Mountain Golf Club in La Quinta, he carded a blistering 5-under 67 in the final round to force a playoff with Pepperdine junior Derek Hitchner at 12-under. Ott then birdied the first playoff hole to win the event. CSU teammates Cullen Plousha and Davis Bryant tied for third  seventh, respectively.

“Ninety-nine-point-nine percent of that is A.J.,” Oldham said of Ott’s accomplishments. “He’s such a hard worker and a good, humble person.”

The soft-spoken Oldham could very well be describing himself.

He and Ott started working together in February, 2019, at the suggestion of Eric Hagen, then a student of Oldham’s, playing for the University of Denver. “I think we make a pretty good team,” the coach said of he and Ott. 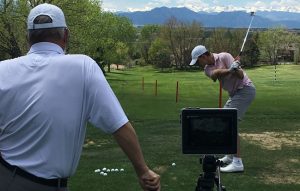 Oldham and Ott on the range at The Ranch CC in Westminster.

The results speak for themselves. In July of 2019, Ott won the Southern Amateur and was low amateur in the CoBank Colorado Open. He currently sits at 76th, his highest spot in the World Amateur Golf Rankings.

As to the secret to his student’s recent success, Oldham believes a “tiny adjustment” the two made to his swing path over the winter might have helped.

“A.J. is a lefty and he felt his swing path was too far left, so he sent me some videos of his swing,” Oldham explained. He also had Ott send his swing path and low-point (where the swing bottoms out) numbers from Trackman. The instructor made some suggestions, “and a week later, I saw him and his swing and ball flight had really improved.”

Over the course of more than 35 years, Oldham’s ability to couple the latest technology with his innate knowledge of swing biomechanics, his diagnostic eye and clear communication skills have taken thousands of students to the proverbial next level. He predicts we’ll be watching the hard-working, supremely talented A.J. Ott on the PGA Tour in a few years.

And on August 29, 2021, we’ll be watching Ed Oldham become the newest member of the Colorado Golf Hall of Fame.

Get directions
© 2022 Colorado Golf Hall of Fame. All rights reserved.