A familiar name to anyone who follows Colorado golf, Gary Baines has spent nearly 40 years as a sportswriter in Colorado, covering all sports, but focusing primarily on golf—the game that helped the former Columbine caddie (who also looped for Jack Nicklaus during a 1981 exhibition at Pinehurst) earn an Evans Scholarship to the University of Colorado.

After graduating with a journalism degree, Baines interned at the Littleton Independent and Boulder’s Daily Camera, which hired him and where he would work for 25 years. He eventually rose to the position of sports editor, a position he held for six years. In 2008, he devoted himself exclusively to golf, founding coloradogolfjournal.com, which led to him becoming the year-round contributor to ColoradoGolf.org, the Colorado Golf Association’s website, often filing and photographing multiple stories per day during the height of the golf season

With characteristic humility, Baines says it’s been “fun playing part in chronicling what’s gone on in the game locally for the last few decades, but in many respects, I feel undeserving of being in the same company as people I consider to be legends of golf in this state.”

“It’s hard to put into words what Gary Baines has meant to golf in Colorado,” CGA Executive Director and CEO Ed Mate said. “Fortunately for us, he has never had any trouble putting things into words! His writing will provide an archive for future generations that will outlive us all. If it happened in Colorado and it involved golf, Gary was there to write about it!”

In addition to every CGA, CWGA, AJGA and Colorado Junior Golf tournament, Baines has covered every Colorado Open since 1983, all 21 Internationals at Castle Pines, two U.S. Opens, one PGA championship, three U.S. Women’s Opens, a Solheim Cup, three U.S. Senior Opens, two U.S. Amateurs and many other USGA championships. His work has resulted in a half-dozen Colorado golf journalism awards from such organizations as the CGA, Colorado PGA and the Colorado Open Golf Foundation. He also earned the 2019 Robert Kirchner Award “for having contributed greatly to amateur golf, professional golf and/or tournament golf in the state of Colorado.”

“It’s quite an honor to have been around Colorado golf long enough to have known many of the people in the Hall of Fame,” Baines says. “They’re certainly a distinguished group—both for what they’ve accomplished and just how enjoyable they are to be around.” 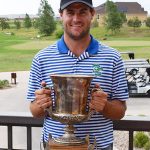 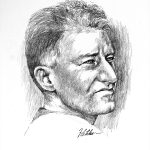